The water crisis in Cochabamba began when the American government and the World Bank encouraged the Cochabamba government to get rid of one of their main sources of income:

“Bolivia is one of the poorest countries is South America. 70 % of its people live below the poverty line.” (PBS), because they were struggling so much they sought any relief they could get and they followed to orders of international leaders strongly.  Because of this it lead them to listen to the world bank when they said they should privatize their water system, selling it to a private corporation: Bechtel Corporation of San Francisco.

The riots began not soon after the privatization, because many believed it wasn’t fair for someone to own the water.  Not soon after they bought the water system, they raised the water rates, leading the people to become even angrier, they were sick of their country being ruled by other international companies.

“Everyone was protesting, everyone,” journalist Luis Bredow 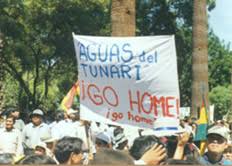 The cocaleros ended up playing a major role in the victory of the people in terms of winning over the Bechtel Corporation of San Francisco, cocaleros are the people who previously grew coca beans.

Malawi is of the poorest and most densely populated African countries, this being one of the reasons why their health care systems suffered and why Partners in Health decided to take on the country, to help improve the overall health of the people.

Within a month of getting to Malawi and starting work, there was already construction being done on a Neno District Hospital, one of the poorest and more rural areas of Malawi.  PIH worked along side Malawi’s Ministry of Health to help develop a more useful and productive health care system, which was community based and easily accessible by all of the people of Malawi.  PIH renovated 7 community health centers, which are local facilities available to everyone and are run by community members who have been trained to be professionals in the field.  The Neno District Hospital in Lisung Wi was completed in three years, this area is most heavily affected by the AIDs epidemic, off of the hospital in surrounding areas there are three training facilities to teach community members how to be health care providers and to work in the hospital and the local community health centers.  This not only educates some of the community but provides tons of jobs for people all over Malawi.

The Main goals of PIH for Malawi are:

PIH has gotten a lot of financial support from the Clinton Foundation, who has also supported them in Rwanda as well. PIH also likes to look at the whole picture of people in these developing countries, they understand that these people not only are suffering because of diseases such as TB and HIV, but also because they are struggling with money, providing food, and even shelter for themselves and their families so PIH works to give socioeconomic support as well.

Welcome to your brand new blog!

This is a sidebar and can be changed by going to Appearance > Widgets in your dashboard.